This Painting is Impotent Against the Murderous Inhumanity of Capitalism (I), 1999 (Oil and acrylic on canvas / 112 x 132 cm) 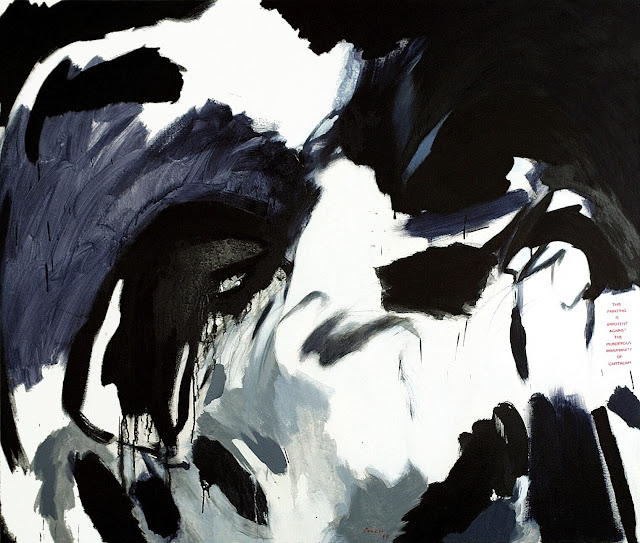 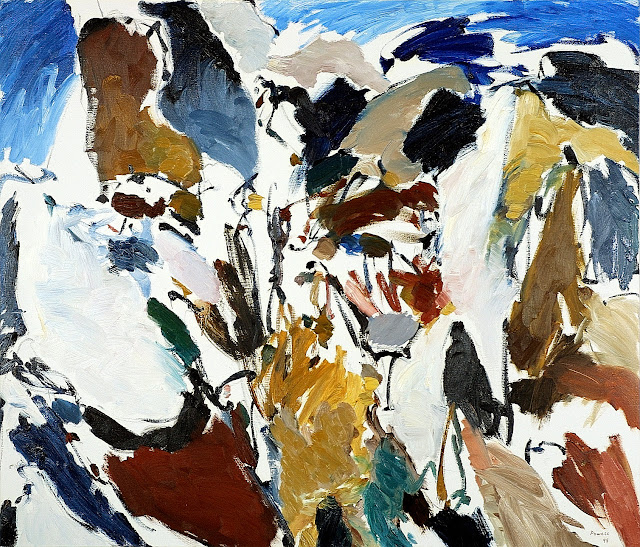 
Music listened to while working on this painting: 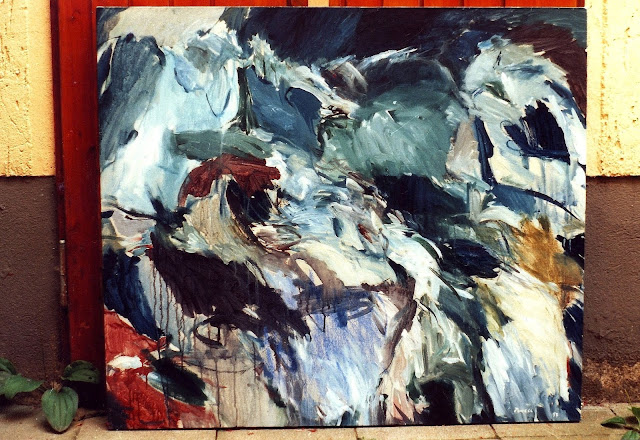 Music listened to while working on Storm Patterns I: 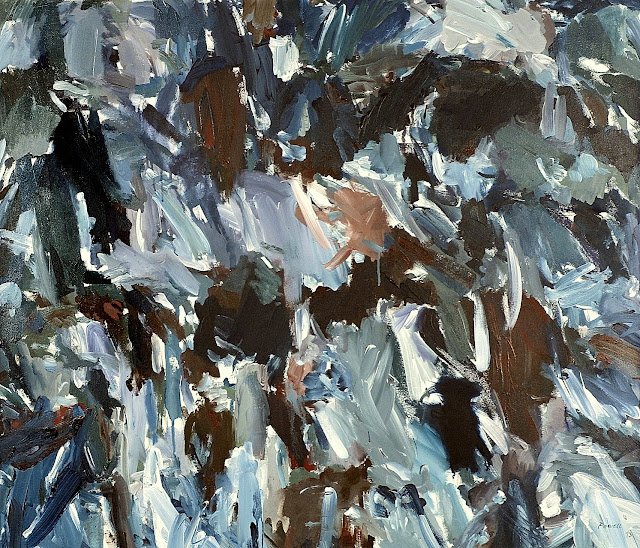 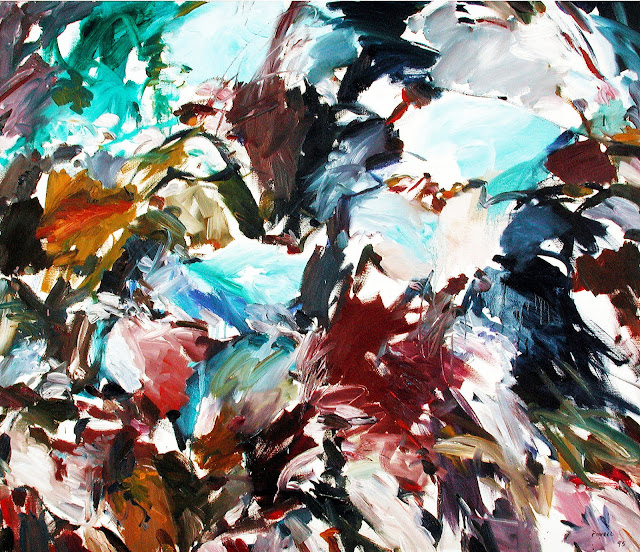 can be viewed here: 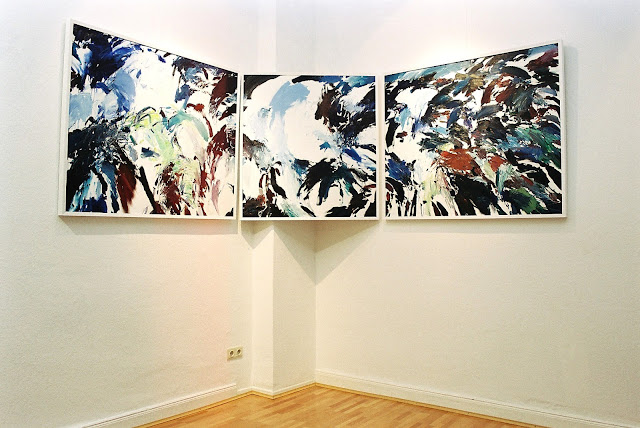 
Music listened to while doing these paintings: 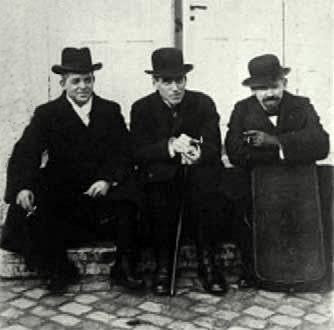 From an interview with Eric Bogosian 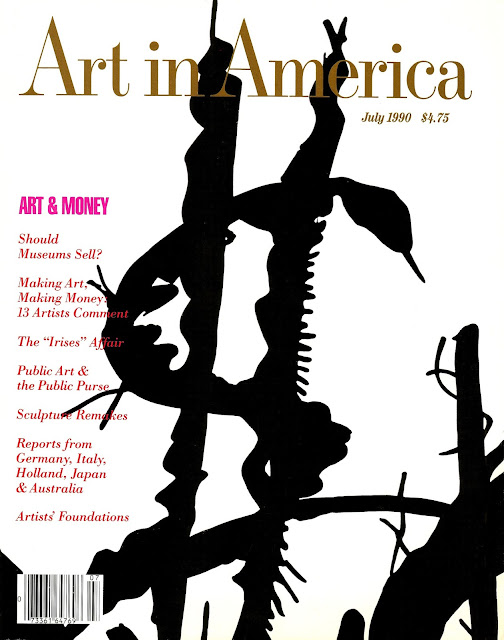 [As of 1990] Eric Bogosian has been making solo performance works and plays in New York since 1977. Among them are Sheer Heaven (1979), The New World (1980), Talk Radio (1987), Drinking in America (1988) and, most recently, Sex, Drugs & Rock and Roll. He makes occasional appearances on television and in motion pictures, and his play Talk Radio was released as a film, directed by Oliver Stone. Bogosian has been awarded an Obie, a Drama Desk Award and a Silver Bear (at the Berlin Film Festival) for his work. He currently lives in New Jersey.

"Since the vast influx of middle-class baby boomers out of the liberal-arts programs of various colleges, there has been a different sensibility in the art world. Today, a lot of artists believe that they should be able to make a good living being an artist. They want to enjoy the fruits of their labors. But thinking about art in terms of its economic consequences is really going to change the kind of art you make. I was pretty much at rock bottom economically at age 30 – seven years ago – and I was going to leave the creative arts because there was no way for me to make a living. Then the roll of the dice changed and suddenly I was able to make a very good living. But it wasn't something I pursued.

The decadence of this country is reflected in the decadence of an art world where artists who make more money are seen as more successful than those who make less. This is really sick because for every Robert Longo or David Salle there is a Michael Zwack. The work is equal in value or interest but one person makes a lot of money and the other doesn't. This may even out in the long run but right now it causes problems throughout the creative arts. Young middle-class artists are obsessed with success even when they don't admit it. The art world and the media are obsessed with success. As my work becomes more complex and and more successful, all the press ever talks about is how much money I make. They're obsessed with artists who make the biggest livings instead of the art itself. We lose on both sides. The artists who aren't making money lose out on critical space in the papers, and the artists who are are making money are talked about only in terms of their money and success. My work used to be discussed in various art magazines; now, that I'm successful, the most in-depth discussion of my work is found in the New York Times.

Today, the really strong skew in the art world toward material things is because of the middle-class artist. This child of the middle-class wants to have a car, a loft, kids; basically, he wants to duplicate a middle-class suburban existence. Generally, in the history of the arts, artists were either very poor or came from very wealthy families. Today, we're talking about artists with country homes and a Volvo. Because we are not unlike other Americans with their fixations on materialism, we have disturbed our own art / life equilibrium. We can't seem to go back to a bohemian life style. Bohemianism flourishes in the midst of wealth – in France at the turn of the century, in Holland even now, in the United States in the late '50s and early '60s when we were the wealthiest nation in the world. Then, it was easy to believe that nothing terrible could happen to us if we didn't have money. Today, when we are on the verge of being evicted from our apartments and lofts and the homeless are all around us, it becomes much more scary. The middle-class ethos comes up and takes over; the artists become mesmerized by their economic condition and feel they have to do something about it. I'm not just talking about other people, I'm talking about myself as well. I've been very lucky, stumbling into a situation where I can keep doing what I want to do and people are throwing money at me, but I don't know what would happen if it shifted suddenly. The idea that the artist wants to have material comfort in his life is an idea inherited from the middle class. You have to pay the rent but it's a complex issue. If material comfort is placed above all other things, it is destructive for an artist; because an artist must place his art first.

I'm on the fringes of an incredible industry – the United States entertainment industry. I'm like a tiny island you can't even see, a little island of sand with one palm tree on it, but to be in any relationship at all with the entertainment industry means that the crumbs which fall off the table can leave me in a very comfortable situation. Very often, the things that have made me a good living in the past five years are projects that haven't been completed: they think in Hollywood that I'm somebody to be encouraged, so different projects are set up and I get paid for them. At the same time, I'm doing my thing, the same kind of things I've been doing for ten years. I don't aim for any economic result; it would destroy the work. When Talk Radio was finally produced as a play in 1984 or 1985, if you had told me it would be made into a movie by Oliver Stone – I didn't even know who Oliver Stone was in 1985 – I would have said that's incredible; but that's how it worked out. Actually, Talk Radio didn't make a lot of money at the box office, but contractually they had to pay me a lot of money – and they finally did. But there's no way I could predict that Talk Radio or Sex, Drugs, Rock & Roll would work out the way they did. I'm sure some people out there can aim for it and get it but I can't. In fact, we had 30 people walk out of the Orpheum the other night. Maybe they thought that Sex, Drugs, Rock & Roll would be more laid back, more entertaining. As they left, the usher said, 'Well, ladies, it ain't The Sound of Music.'

It's not fun to be poor. We used to romanticize the artist's life; we used to romanticize poverty. We spent years in art school studying the lives of artists, learning how to live like an artist. It was going to be cool to come to New York and live on the Lower East Side next to dope dealers. At the same time, we wanted to bop around and dress well and eat well. But it wasn't Montmartre and we weren't wealthy; we became frightened by the squalor and the poverty. I saw that in 1980, and soon thereafter I decided to quit the whole thing. I didn't want to live in a slum the rest of my life. I had rats in my apartment. How would you like to be in an apartment with a rat trying to chew his way out of your bathroom every night? He'd go into the kitchen and take the food and hide it under the couch and we'd argue about who ate it all, especially the cherries.

It comes with a middle-class background to feel guilty when you do well. I'm not apologetic, but I am sad about the state of things today. I live in a city where people are very unhappy and without resources. The art world has also changed radically. For me, it's become much more polarized: there are the haves and the have-nots. It happens that a bunch of my friends did all right, but even they have incredible stresses economically. We all had nothing in 1979 but it was a lot of fun. I'm saddened by the passing of that but I don't know what to do about it. […] "